I write romance novels. Contemporary women’s fiction is the category I’ve decided they fit into, or maybe Chick Lit. I’ve started (and almost finished) four.  I like female protagonists in their late-twenties/early thirties (like I keep thinking I still am). My protagonists are women who are searching for their place in the world, coming to terms with realistic relationships and (lately) having children. The novels are written in the third person, often from both male and female perspectives.

So why is my first self-published novel written in the first person? By a sixteen-year-old girl? And why is it about dragons?

I didn’t set out to write the book. The book found me: Last Easter to be precise. I woke one morning, after a broken night full of strange dreams, and the entire story was in my head. Unfortunately by the time I’d wrestled past two small children to find pen and paper (or, more accurately, my mobile phone) the story had evaporated, as they so often do. I believe if I could only capture my dreams, writing would come much easier to me than it does now.

All that remained was the idea of dragons and the first line of the story.  “My name is Leah, and I know the time and place of my death.”

In the twelve months since I wrote that first line it hasn’t changed much. It now reads “My name is Leah. For a quarter of my life I have known the time and place of my death. I have spent the last four years running, from the truth, from the place. I can’t run from the time. It’s tomorrow.”

And that’s how Dragon Wraiths was born. By the beginning of May 2012 (less than a month after the dream) I had written 35,000 words and I still didn’t really understand what the novel was about. I hadn’t got to the part with the dragons. I was lost and decided Young Adult literature was not for me.

I abandoned the novel and concentrated on releasing my novel, Baby Blues & Wedding Shoes (or Pictures of Love as it was called then) as a self-published e-book.  My writing journey is interspersed with self-doubt, not just about my abilities as a writer but about combining writing with the raising two small children. I often feel that, if I’m going to send them to nursery two days a week, I should be earning money on those two days. I wanted a finished book out there earning pennies and I felt the Chick Lit novel was a better bet.

Then in July I found out about the Mslexia Children’s Novel competition and remembered my languishing YA novel. Baby Blues was with beta readers and I decided, Why not? Suddenly I had a deadline of September for completion of the first chapter and November for the finished/edited manuscript. I discovered I work best to deadlines. Generally I’m terrible at knuckling down and getting on with editing but I really wanted to enter the competition.

To cut a rambling story short I entered the Mslexia competition and was long-listed (meaning they requested the full manuscript). I didn’t make the shortlist but I was encouraged enough to pass the novel to friends and family. Their reaction was amazing. My stepdad, who is a slow reader, finished the book in a day and said “Next one, please.”

I started querying the novel, although it is over-length for a YA book at 112k words (the average is 60-70k). When that didn’t work I decided to self-publish and see what happened.

And so here I am. It’s early days, I haven’t sold many copies, but over 1200 have been downloaded during free promotion days. I’ve received several positive reviews, including one that compared Dragon Wraiths to Anne MaCaffrey’s Dragons of Pern series. Praise indeed.

I’m still not sure self-publishing is for me. Or Young Adult for that matter. But I’m glad Dragon Wraiths found me, in my sleep-deprived state. I enjoyed writing and editing it more than anything I’ve done before or since. Thinking about the Happy Ever After ending still makes me smile and leaves a warm feeling in my heart. And who knows, one day it might be as famous as Dragons of Pern. Now wouldn’t that be nice? 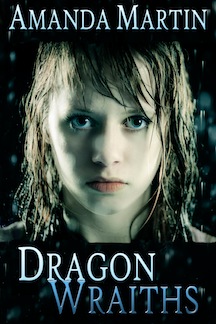 It’s the day before Leah’s sixteenth birthday. Instead of planning the perfect party she’s stuck in a shabby B&B in the middle of nowhere. She’s not worrying about pimples and presents: she has bigger things to freak her out. Like her Mother’s dying words telling her she will die on her sixteenth birthday. Spending her teenage years escaping from falling trees, burning buildings, killer bees—and the unseen enemies trying to murder her. Or falling in love with a boy who won’t admit she exists, even though they’ve been on the run together for months.

As her birthday approaches, Leah tries to piece together the events that led her there and wonders if she’ll live past lunchtime. What she doesn’t know is her future will include conspiracies, dragons, new powers: Her first kiss.

And the responsibility to save two worlds.

My name is Leah. For a quarter of my life I’ve known the time and place of my death. I’ve spent the last four years running – from the truth, from the place. I can’t run from the time. It’s tomorrow.

I look down at the words and, with a sigh, think about scrubbing them out. I sound like I’m writing a gothic novel instead of an explanation of my life. Out the window I can see a bunch of bedraggled birds lined up on the power cables like sheet music. It reminds me of tortuous piano lessons with Miss Hay. I’d probably rather be there than here right now. At least rapping my knuckles with a ruler didn’t actually kill me.

Past the power-lines, low hills fill the horizon. Not the dancing green hills I grew up with. No, these are craggy like a huddle of grumpy old men waiting for the bus. The sky is grey, the hills pewter and ochre, mixing to form a muddy palette of colours. It doesn’t feel like summer. The nearest thing to sunshine is the gold swirling pattern on the curtains. I know if I turn around to face the room I will see the matching bedspread and frilly lampshade. It’s a wretched place to spend what could be my last day on Earth.

Uncle Theo says he chose this place, “for the location, Leah, not the décor.” Just as well.

They’re downstairs, Luke and Theo. I wonder what they’re talking about. What is there left to say? Either we’ve done enough, and I’m far enough away to escape my fate, or this time tomorrow they’ll be heading back south without me. It doesn’t seem the basis for a jolly conversation.

Amanda Martin was born in Hertfordshire in 1976. After graduating with first class honours from Leeds University she wandered around the world trying to find her place in it. She tried various roles, in England and New Zealand, including Bar Manager, Marketing Manager, Consultant and Artist before deciding that WriterMummy summed her up best. She lives in Northamptonshire with her husband, two children and labradoodle Kara. She can mostly be found at http://writermummy.wordpress.com

4 thoughts on “Amanda Martin: The Book Wrote Me”