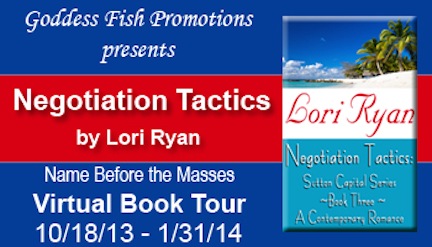 Lori will be awarding a $50 gift certificate to Amazon to a randomly drawn commenter during the tour. Click the banner above to follow the tour and increase your chances of winning!

Susana: If a publisher offered to fly you anywhere in the world to research a book, where would you go and why?

Lori: What a fun question! And, as usual, I have more than one answer.

Nantucket Island would be high on my list. I love small town romances but small town on an island? So much fun! I went to Nantucket as a child but I don’t remember much so I’d want to go back again to really get a feel for it.

Italy would be nest on my list. I mean, who doesn’t love a romance novel set in a beautiful olive grove in Italy with details about little cobblestone streets and restaurants with Gnocchi that melts in your mouth the way it should. And, wine! Oh, the wine. Yup, Italy is high on the list for me!

Then, I think maybe it would be fun to hit somewhere like Greece and write a story about ancient artifacts that go missing or a mystery surrounding an ancient culture. I think the colors and the architecture and the winding hills of Greece would be so inspirational.

But, go take a look at pictures of the Phi Phi Islands in Thailand and tell me that’s not the most beautiful setting for a romance novel in the world? Come on, Google it! See what I’m talking about?

Leave a comment to tell me where you would go!

About Negotiation Tactics: Book Three in the Sutton Capital Series

Fans of the Sutton Capital Series have been waiting for Jennie and Chad’s story for a long time and they won’t be disappointed! And, new readers are sure to fall in love with the series.

After the crushing heartache of losing her husband at a harshly young age, Jennie Evans had finally found a place to call home. She had a job she loved and new friends to support her. With the exception of having to continuously fight off the feelings she had for Chad Thompson, she was happy again. As happy as she could be anyway. When Jennie’s well-meaning friends meddle in her life, they send her world into a tailspin once again. Soon, she’s on the run from some very dangerous people with the one man she doesn’t want to be with.

Chad Thompson has loved Jennie from afar for the last year, but he’s maintained control. Jennie’s made it clear she wants nothing to do with him and he won’t cross the line she’s drawn in the sand. Until she asks him to. And, when that happens, their world is turned upside down. Chad’s left scrambling to keep Jennie safe as he tries to right their world again. Unfortunately, Chad has to accept the fact that his heart is likely to be crushed in the process and nothing will ever be the same again.

Chad suppressed a grin as he watched Jennie. At the moment, Jennie and Chad were in the pool at Kelly and Jack’s house, where everyone had gathered for one last party before the baby arrived. Chad stood on one side of a volleyball net and Jennie stood on the other. Somewhere along the way, he’d forgotten what Jennie was arguing about, but he didn’t care. Chad loved to see her fiery eyes sparkle as she fisted small hands on her hips and lit into him. She barely reached his chest, but she should get points for trying. Jennie tossed her head, flinging her strawberry-blond curls out behind her and kept right on going.

Chad loved this side of Jennie. She was bold and brash and confident. She was feisty and fun loving and nothing seemed to frighten her. Not many women Jennie’s size – a mere 5’4” and 115 pounds – would try the things she did with Chad. At 6’4” and about 265 pounds of pure muscle, there weren’t many people who treated Chad the way Jennie did. Jennie taunted and teased Chad at every turn, almost as if she were two or three feet taller than him.

Chad knew why she did it. They both felt the wild attraction that sizzled between them and they both worked hard to control it. With so many mutual friends, coupled with the fact that they worked together all day during the week, they couldn’t avoid seeing one another. So Jennie seemed to deal with things by throwing her saucy, cheeky attitude at him all the time. It was almost as if she tried to keep their interactions superficial, never going deeper than the surface. If she was busy yelling at him or taunting him, there wasn’t any room for anything else.

Lori has had a number of careers before embarking on her newest adventure of writing novels. After graduating from the University of Connecticut School of Law, she practiced law for three years, working primarily in the areas of utilities law and intellectual property litigation.

Lori still lives in Austin with her husband — who is endlessly supportive of her changing career paths — and her two children, one cat, and three dogs.

Want to be a part of my online street team? Email me at Loriryanauthor@gmail.com and put the words ‘street team’ in the subject line. I’ll email you back with directions for joining my team.