Clare will be awarding a print (US only) or digital copies (international) of the first two books in the series, Butterfly and Angel’s Share to a randomly drawn commenter during the tour. Click on the banner above to follow the tour and increase your chances of winning!

They call her Selkie. Muireann O’Malley often felt she was born of the sea but refuses to let sentimentality stand in the way of her crusade to protect the shore she has wandered since a small child. A patch of West Clare, Ireland, and a derelict building are all that stand between the cliffs she loves and the callous grip of progress. 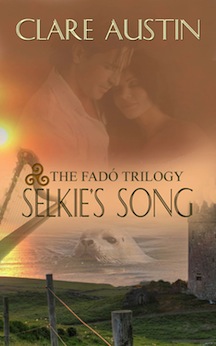 Tynan Sloane should be content with success, but a dream beckons. O’Fallon’s Pub in historic downtown Boston is for sale and Tynan wants to make it his. An unexpected inheritance of land in the west of Ireland could provide the financing he needs. He doesn’t expect his quick trip to sell the land to rekindle youthful passion.

Fifteen years ago, they had an adolescent crush. Now disparate ambition and a legend as old as Ireland herself stand between them. Will love and myth collide to bring them together or tear them apart?

Solar heat warmed the rocks where she lay. Her pelt discarded, white skin exposed to the morning light, the selkie closed her eyes and listened to the song of the sea, a pulse to match the one of her own blood in her veins. Gulls circled, their shadows fleeting past, voices raised in an ancient call.

A darkness blocked the sun and she opened her eyes. Ebony wings hovered over her. A raven lighted gently on her breast. She watched as feathers stroked her skin, causing cool tingles to warm as the sensation moved across her body. Wingtips evolved into fingertips. Deep rivulets of heat spread in concentric circles, radiated from her core to extremities and down her midline to the cradle of her belly where pleasant fire kindled.

As she closed her eyes she could feel the beating of his heart in counter-rhythm to the pulse in her own chest. His breath was warm on her cheek. “Open your eyes,” he beckoned in a deep musical tone. “I came here to find you.”

Her eyes were heavy. Through slitted lids she could see his face, his pale skin and eyes that rivaled the blue of the sky in evening. Paralyzed with sleep, she tried to lift her hand to stroke the angle of his jaw, but her body would not respond to her brain’s demand. She ached to weave her fingers into his hair and pull him to her.

Clare Austin submitted her first manuscript to a publisher at the age of eight years. She wishes she still had that rejection letter.

Many years and not a few stories later, with characters knocking at the inside of her cranium and begging to be released, Clare’s romantic comedy, Butterfly, was published. There followed a suspenseful sequel, Angel’s Share, and Hot Flash, a women’s fiction/romance for mature women and the men who love them.

Clare lives in the beautiful Rocky Mountains and enjoys her horses, playing her violin, and traveling to Ireland every summer.