Elizabeth will be awarding a $25 gift card to either Amazon or B&N and a boutique river stone bracelet to a randomly drawn commenter during the tour. Click the banner above to follow the tour and increase your chances of winning. 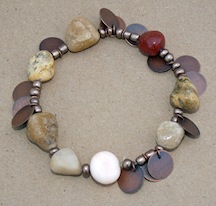 What did you want to be when you grew up?

There were so many things I wanted to be that I can’t even remember them all. Park ranger, Peace Corps volunteer, nurse, veterinarian, doctor. I told my parents not to worry because I was going to have a book deal by the time I was twenty-five and I’d be a career author! Little did I know how hard that would be to actually accomplish. Luckily, after taking some preliminary college classes, I found that I was called to healthcare, which lead to my degrees in Medical Assisting and Emergency Medicine. And, I did get my author prediction to come true as well (though I was 38, not 25), so it all turned out just fine.

Are you a plotter or a panster?

I’m a total panster. I rarely have any idea of where a book is going to go until I start writing it. Because I have so many commitments currently, I’ve had to get better about plotting. Now I create a very basic outline of my plot points and the general direction the book will go, as well as a rough ending. Then I flesh it all out with the actual process of writing, and I never, ever know where the plot and characters are going to take me.

Do you write in multiple genres or just one?

Every writer dreams of getting “the call.” What were you doing when yours came? Who got to hear the news first?

Mine actually started with an email—well, three emails, that all came in at the same time! I was on a field trip with my middle daughter and had a group of six 4th graders that I was chaperoning. We stopped for lunch, and I quickly checked my email in my phone. To my shock, I had emails from three literary agents, all requesting phone conversations to discuss my books.  I had only quickly glanced at the emails, but my heart was racing and I felt numb all over! I sheepishly handed off my group of girls to another parent for five minutes, went in the bathroom, locked myself in a stall and read/responded to the emails. My critique partner group was the first to know. I texted them all from the bathroom stall! I had the phone calls a few days later, and within a week had chosen my agent. It was a wonderful whirlwind!

What is the one modern convenience you can’t live without?

Oh, my cell phone, for sure. Especially now that my children are older. It’s the only way I can keep track of my teenager and what kid is going where, and when. Plus, as a full time emergency medical technician, I’m not always able to sit down and check my email. I can easily do so on my phone when I’m in between 911 calls. It’s the only way I keep up and stay organized.

When was the moment that you knew you had to be a writer?

When I was invited to join a writer’s group with a really talented bunch of women. The woman who invited me to join knew that I’d been dabbling with a book for several years, but hadn’t completed it. A couple weeks after I’d joined the group, one of the members landed an incredible book deal, and several others were getting agents. I had been writing for as long as I could remember, but never made it a priority. I remember reading my friend’s book deal announcement over and over, and it hit me that I’d never be satisfied until I at least tried to finish my novel. So I did. In the end, the book, Blood of Isis, had taken me 7 years to write, but I completed it and ultimately sold it to a very small publisher. I was so inspired that I’d finished that darn book, that I went on to write Tempting the Cowboy in just seven weeks, and ultimately landed an agent and book deal with it. There was no turning back for me after that.

When I was about 14, I wrote this horrible Viking “romance” and made my mom read it. Later, when I was an adult, she told me she had to go to her bedroom to read it so I wouldn’t see her cringe/laugh/wince. We laughed about that for years. Did you write something in your younger years that you still remember fondly?

About Tempting the Cowboy

After personal tragedy and taking a job on a quiet Montana dude ranch, ex-cop Rylan Frederickson finds herself surrounded by unbelievably sexy cowboys. Too bad the one she’s attracted to is her boss…and the single dad of a four-year-old. It doesn’t matter anyway; there’s simply no more room in her heart.

Letting a new woman into their lives is the last thing Cole Haywood wants for himself and his daughter, Birdie. But as Rylan’s presence at Paint River Ranch breathes new life into his family he can’t ignore his growing attraction.

When the sparks between them turn into fireworks in bed, Rylan’s torn between the family she’s lost and the one she may have found. Now she must decide if something that feels this good is worth the risk. 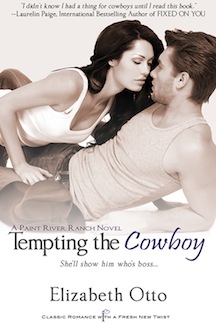 “What the hell?” Cole turned to fully face her, grumbling something about a man not even being able to get drunk without work interrupting. His snug shirt dipped into the lines of his chest, creating a tempting outline of firm pecs, narrow waist, and tight abdomen. A thick leather belt with a square silver buckle set the tone for the well-worn jeans clinging to his long legs. Rylan hitched an eyebrow. At least there was one good thing about this trip—the hype about cowboys being sexy as hell was true.

More than a little irritated with how her lust was playing tennis with itself, Rylan crossed her arms. “Hell is appropriate, actually. Now down the drink, and give me your keys.” She had one hand on her hip—habit, she supposed, from reaching for cop toys to make jerks like Haywood behave. His eyes fell to her lips again and stayed there.

“You were supposed to take the bus to Greenbrook. Tomorrow.”  His tone implied she was an idiot

His hand cupped the beer glass while he studied her. Rylan stared right back, wishing the butterflies would take a hike. What was this reaction about? Cooped up too long with too little interaction with the outside world, she guessed. Her body was reacting to the first enticing man she’d seen in too damn long. Good thing Cole was her boss so she wouldn’t be tempted to act on her brain’s internal “look at the pretty cowboy” jumping and pointing.

Cole pulled his lower lip between his teeth and narrowed his eyes. “You’re a little ornery.” He reached one hand to her shoulder and flipped a chunk of her hair.

Rylan’s breath ran away as the back of his hand brushed over her collarbone. A shiver raced over her body, warm and sweet. She leaned away from him. “Excuse me?”

He shrugged, a slow smile crossing his face at her reaction. “That’s okay. Ornery is good.”

Her lips parted to sling an insult, but she refrained. No sense in wasting perfectly good angst on a drunk who wouldn’t remember it in five seconds. “I’ll play along. Why is that good?”

Cole took a slow breath, his eyes darkening. “Because you’re pretty. I like pretty. But I don’t like ornery. So we should be just fine.” He nodded as though he’d just made a deal with himself and was quite pleased about it. Before she could even think of a response, he shoved his beer away, untouched, and moved from the bar.

Elizabeth Otto grew up in a Wisconsin town the size of a postage stamp, where riding your horse to the grocery store, and skinny dipping after school were perfectly acceptable. No surprise that she writes about small communities and country boys. She’s the author of paranormal, and hot, emotional, contemporary romance, and has no guilt over frequently making her readers cry. When not writing, she works full-time as an Emergency Medical Technician for a rural ambulance service. Elizabeth lives with her very own country boy and their three children in, shockingly, a small Midwestern town.

10 thoughts on “Elizabeth Otto and “Tempting the Cowboy””