Kristine will be awarding a $5 Amazon GC to 5 randomly drawn winners via Rafflecopter during the tour. Click here for the Rafflecopter. Click on the banner above to follow the tour and increase your chances of winning. Comment to enter the contest for Susana’s September Giveaway, a lovely necklace from London’s National Gallery (see photo at right).

When a deranged mother’s grief drives her to replace her dead son over and over, obsession leads to murder…

Chicago detective Jessica Donavan will never stop looking for her missing daughter. Her obsession has destroyed her marriage, but the search is the only thing that helps keep her sane and her mind off of everything she’s lost—her husband and her baby girl. When she uncovers a string of unsolved disappearances and reappearances of a number of baby boys, Jessica turns to her soon to be ex, Dante Russo, a former Navy SEAL turned investigator for the private agency, CORE, to help her fit together the pieces in this perplexing puzzle. But as Dante helps her, she realizes just how much she still craves his support—and his touch.

Dante is still in love with his wife and would do anything to have her back in his life again. He’s been miserable since she left him to deal with the grief over their daughter’s abduction, never understanding how much he grieves as well. When Jessica tells him about the case she’s working, he jumps at the chance to take part in her investigation. He’s hoping not only to save their marriage and ease his personal pain over the loss of their daughter, but to stop a serial kidnapper from taking another victim.

As Jessica and Dante work side by side, pregnant women begin to turn up missing or dead, and they start to uncover the consequences of another woman’s unfathomable grief. The childless mother doesn’t just want a baby. She wants a newborn straight from the womb.

And when forced to confront the dark and twisted perversion of a mother’s obsession, can Jessica and Dante find their lives again…or merely more death?

Jessica’s heart sped up when she caught the determination in his eyes. “Then why did you have me come over?” she asked, suspecting his reason. Dante knew his lasagna was her favorite, and then there was the discussion of dating. Chances were, like her, he could use a sexual release, but she needed a straight answer. As it stood, she’d end up dwelling on their conversation until sleep finally consumed her, but at least she’d have this portion of it settled.

Dante took several steps forward until he crowded her against the kitchen counter. “Honestly? I planned to romance you.”

His familiar, earthy scent surrounded her. He stood so close, his warm breath caressed her lips. She could easily see them having sex right here in the kitchen. Hard, fast and hot sex.

He cupped her cheek with his warm hand. She sighed and closed her eyes at the gentle touch and leaned into his palm. She’d missed the feel of him.

“I don’t want a divorce and I hate living here without you. I lied to get you here tonight, because I wanted to see if there was anything left between us.”

She stiffened and opened her eyes. Her stomach tightened, not with sensual need, but with fear and self-loathing. And she had no one to blame but herself. She’d walked away, left their home, left him. Not because she didn’t love him, but because he represented what she’d lost. “Is this the point where you pull out one of your spiritual quotes? Maybe you’ll give me the ‘if you love something, set it free’ line. That’s rather fitting.”

He gave her a tired smile, then surprised her by cupping the back of her head and drawing her closer. “That one might work. If you still love me.” 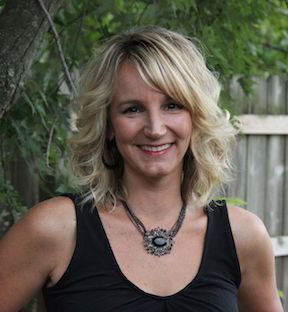 I didn’t pick up my first romance novel until I was in my late twenties. Immediately hooked, I read a bazillion books before deciding to write one of my own. After the birth of my first son I needed something to keep my mind from turning to mush, and Sesame Street wasn’t cutting it. While that first book will never see the light of day, something good came from writing it. I realized my passion and found a career I love.

When I’m not writing contemporary romances and dark, romantic suspense novels (or reading them!) I’m chasing after my four kids and two neurotic dogs.

Subscribe to my newsletter and enter to win a $50 Amazon gift card!