Christy will be awarding a $40 Amazon or B/N GC to a randomly drawn winner via Rafflecopter during the tour. Click here for the Rafflecopter. Click the banner above to follow the tour and increase your chances of winning.

About The Truth About Lilly

Lilly Talbot never imagined she would be starting her life over again. Losing her good name for something she didn’t do has driven her to move into an old lake house she inherited in Vermont. Upon arrival, she is shocked. Half the roof is about to slide into Lake Champlain. Even more upsetting, the man who can fix it will only agree if she trades him room and board for his labor. What will the good people of Haley think of her sharing a house with the handsome bachelor?

A man with a past…

Connor “Mac” McQueen, once one of the infamous Whiz Kids of Wall Street, spent three years in prison for insider trading. Only one thing sustained him during his time inside, the thought of owning Point Cottage, a home he’d fallen in love with years ago. He plans to turn the house into a stunning showcase for his eco-friendly home construction business.

Now someone’s trying to drive Lilly from her home. Is it someone from her past? Mac has secrets of his own– that could ruin lives if revealed. But if Lilly and Mac are to have a future together they must first delve into the past for answers and accept some difficult truths about each other. Only then, will they know if true love is in their hearts.

Mac looked across the table at Lilly who had given up half way through Mildred’s generous slice of lasagna. She was so ladylike in her pink cotton sweater and black linen crop pants. The sexy silver hoop earrings she wore bounced as she talked with her usual animation. Damn, even the way she blotted her soft pink lips with her napkin got to him. Not that she noticed but most of the locals were looking at them, probably spinning some romantic rumors that didn’t have a kernel of truth. There was nothing to tell. Nothing was happening between them, except breakfast and dinner. They shared both every day, and damned if he didn’t look forward to them more than he did Monday night football. 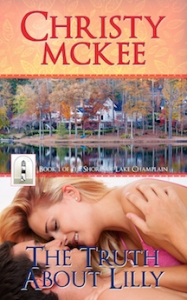 He nodded towards the plastic pastry shelf on the counter. “I would never admit it to anybody but you,” he leaned forward and dropped his voice, but stack those sticky buns of yours against Mildred’s pecan rolls, well it’s like comparing Beluga caviar to fish and chips. Maybe you should become a chef, open your own restaurant. You’re a talented artist, but your cooking skills could satisfy lots of people.”

“Thanks for the vote of confidence, but my art is what’s going to keep the roof above my head and my demon furnace running this winter.”

As she turned away from him to take a sip of her tea, he caught a flash of defiance in her emerald eyes. Whoa. She was definitely not getting much career encouragement from mystery hubby. Thankfully, she had him. Mac wanted to help her succeed. He knew what it was like to have to prove your talent and show people you had the goods to make it. He did know how to help her with selling her work. “Have you given any thought to a booth at the arts festival?” It seemed like the best way to make some quick cash.

Buying some time, she stirred her tea with her straw, dragging it in slow circles inside her glass, her mouth evening into a frown. Then she looked him square in the eye, like she was sizing him up, deciding if she could trust him. Half expecting he wouldn’t make the cut, he was surprised at her words.

“I have sort of a catch twenty-two situation.”

That got his attention. He arched a brow. “Ok?” Maybe she would open up to him about her marital situation. Not that he was a vulture waiting to swoop in for the kill, he just wanted to know.

Being Lilly’s roommate didn’t give him any right to know everything about her. Besides, he wasn’t the kind of guy who swapped life stories with a woman anyway.

“Like I said, my painting is going to support me, and to do that, I have to build a reputation. I’ve been offered my own show at a Charleston, South Carolina art gallery. If the exhibit is a success, it could really launch my career.”

Watching Lilly, her eyes wide with hope and enthusiasm rolling off her in waves, for some inexplicable reason, he wanted her to know he believed she would make it. The portraits he’d carried up to her loft were incredible.

“The problem is to meet the quota of sixteen works, I have to complete seven additional paintings in two months and that’s working fourteen hours a day.”

Some of the starch seemed to slide right out of her. He didn’t know much about art, but seven new paintings sounded like a lot of work. “What happens if you don’t come up with them?”

“I’d breach my agreement. All the prestige and recognition I would have gained would never happen. My credibility in the arts community—at least in the South—would be zilch.”

“Seems to me you’re creating a lot of needless pressure for yourself. Why not skip the exhibition and sell your paintings? There are many kinds of exposure. Word of mouth is important, too. In the fall and summer, we get all kinds of people from New York City up here…”

“No offense,” she interrupted, “but a gallery in Haley, Vermont would have neither the impact nor prestige of the Wentworth Gallery in Charleston. Any Southern artist would be honored to be exhibited at the Wentworth.”

“Guess you’re not going to stick with us up here in the backwoods then, are you? You can’t very well hold on to your Southern artist status if you’re living this far north of the Mason Dixon line. Or does the fact that your husband still lives in Atlanta allow you to remain in the club?” 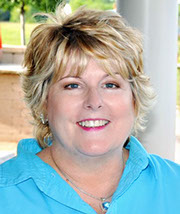 Christy McKee began her career in TV news and eventually found her way into advertising and finally fiction. She believes a good story should be about characters who win your heart, sometimes move you to tears and occasionally make you laugh. As a reader, Christy hopes you’ll be swept into her characters’ lives enjoy getting to know them, experience the challenges they endure and be with them when they come out on the other side.

17 thoughts on “Christy McKee: The Truth About Lilly”