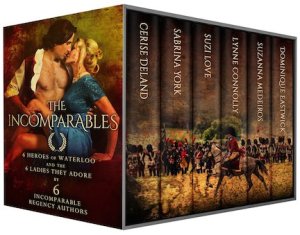 One of six amazing novels in a landmark collection honoring the heroes of Waterloo and the ladies they love!

This limited edition box set includes 6 scorching romances that commemorate the 200th anniversary of the June 18, 1815 Battle of Waterloo.

From the Duchess of Richmond’s ball in Brussels to the Battle of Waterloo and beyond, join these six unforgettable heroes as they journey back from the physical and emotional trials of war and discover the passion that thrills the body can also heal the heart.

Interlude with a Baron by Cerise DeLand

Emma wants only an interlude with the man she’s adored for years. But Drayton Worth has spent five years riddled with guilt for hurting her—and he’s determined to have more than a few nights in her bed.

Daniel Sinclair is a broken man with war wounds that are physical and spiritual. He’s weighed down by grief and guilt and tormented by his tarnished honor. When he meets Fia Lennox, a beautiful and brave Highland lass in dire need of his protection, he sees in her his chance for redemption…or utter damnation. Because despite his valiant attempts to resist her, he cannot.

Love After Waterloo by Suzi Love

When Lady Melton and her son join Captain Belling and the last wounded soldiers evacuating from Waterloo to London, she expects clashes with army deserters but doesn’t anticipate how falling in love with the antagonistic captain will change her life.

Dreaming of Waterloo by Lynne Connolly

Paul “Lucky” Sherstone daren’t even let his wife too close because of his headaches and the living nightmares he can’t dispel. Hetty hardly knows the man who comes back from war, but one thing she does know—she still wants him.

The Captain’s Heart by Suzanna Medeiros

A man who is determined to fulfill his duty at the expense of his own happiness, a woman who wants only one taste of true passion, and a case of mistaken identity. Can Captain Edward Hathaway and Grace Kent overcome the guilt that continues to haunt them both and find true love?

For Love or Revenge by Dominique Eastwick

Captain Roarke Wooldridge is about to find out that sometimes love does heal all wounds.But when his need for revenge collides with desires he never believed he would feel again, will he be able to put aside the scars of Waterloo to embrace his future?

About Tarnished Honor by Sabrina York

Daniel Sinclair is a broken man with wounds that are physical and spiritual. He’s weighed down by grief and guilt that he could not save his friend, Graeme Lennox, and is convinced that a French lance left him less than a man. He has no prospects. Nothing left but his tarnished honor. But then he meets a vexing boy who makes him question even that.

Fia Lennox’s world turned on its end with her brother’s death. She’s gone in one fell swoop from lady to servant…to a woman on the run. The world is a dangerous place for a woman alone—even when she is masquerading as a boy—so when she meets up with a strong, valiant ex-cavalryman, she decides to become his traveling companion. Whether he likes it or not.

Battling villains, would-be-friends and their own finely-forged battlements, Fia and Daniel rush toward their destiny, a scorching passion and, hopefully, redemption. Can love conquer all? Even the ghosts of the past?

There was no other word for it. Simply glorious.

Daniel tipped his face up to the sky and grinned. The sun was shining and the breeze was mild. The sky was blue and tufted with fat white clouds. It was a lovely day to travel—it could have been raining, could have been cold. But since he’d set out from London, on this lengthy journey to Inverness, each day had been prettier than the last.

There was no wallowing on the road; there simply wasn’t time for it.

It was energizing to be traveling again, invigorating to be out in the world, breathing fresh air and going somewhere. He enjoyed the solitude, the quiet, the absence of need to make conversation.

That left him alone with his thoughts, his regrets, his guilt, but such specters had haunted him for so long, they were like old companions. He wouldn’t know who he was without them.

Aye. This was far more healing than any medicine—the power of his mount between his thighs, the kiss of warmth on his face, the movement. Surprisingly, his leg hardly pained him at all, except when he moved suddenly. In fact, it even felt better after several days of riding. He hadn’t fallen off his horse once.

Hunnam was in good form as well. No doubt he’d enjoyed the fresh air and the chance to prance once again. An hour’s exercise a day was one thing, but for a Scots Grey, the chance to run and run wild spoke to his soul.

It spoke to Daniel’s too, so he put his heels to his mount’s sides and gave him his head.

And it was glorious.

Well, his horizons weren’t limited now. They spread before him in a verdant green wash that stretched as far as the eye could see. He passed a loch and paused to admire the sparkling waters, to watch an osprey swoop down to snatch a hapless fish.

And damn, but it was a fine thing to be back in Scotland. Daniel hadn’t realized just how much he’d missed hearing the lilt of his own brogue, or tasting a well-made haggis. The Brits didn’t care for haggis, a fact he’d never quite understood. When created by someone who knew what they were doing, it was delicious. And Scottish innkeepers, apparently, knew what they were doing. Or their wives did.

There was no doubt about it, he’d probably gained a stone since crossing the border to his homeland. He’d never felt so vibrant and alive. And while he had enjoyed the occasional chat with a fellow countryman, he had never enjoyed his own company more. There was something about being alone with one’s thoughts that was very peaceful. It allowed a man to explore his soul at leisure without interruptions. It allowed a man to process all that had happened in his life. To put everything in the place it belonged. Though he still had several days of travel, at most a week, he was already lamenting the journey’s end.

After he passed the Kinclaven Crossroads, the landscape changed from fields and farms to orchards. The looming trees shaded the road in a lacy pattern; the scent of crisp apples filled the air, tempting Daniel to reach up and pluck one for a taste.

He did not. That would be stealing and he was a man of honor.

He pulled back on Hunnam’s reins when he spotted a white mare standing in the road. She was difficult to miss. Her lines were exquisite, her saddle and tack were the finest…but she had no rider. His brow wrinkled as he rode closer. No one would ever abandon such a fine horse. It was—

The imprecation came from the leafy tree next to which the mare stood.

Daniel glanced up; the boughs riffled. An apple fell to the ground.

The mare whinnied and walked over to it, lipping up the treat.

Another apple fell and the horse made short work of that one was well.

“Stop eating them all,” the tree said. “Save some for me.”

Daniel cleared his throat. It seemed prudent to make himself known. “Hullo?”

The leaves rustled and a face peered out. Enormous blue-green eyes stared at him. Something flickered through them. Something that could have been construed as…guilt.

Daniel frowned. “What are you doing up there?” he asked.

The eyes blinked. “Nothing.”

“Nothing?” He drummed his fingers on his saddle. “Are you stealing apples?”

The chagrined expression on that elfin face was nearly whimsical. “Is this your orchard?”

An entrancing, mischievous smile blossomed and the thief tossed him a fat red apple. “Then catch.”

He did not. He did not catch. The apple bounced off his pate.

Too late. Another apple flew in his direction. He missed it again. It fell to the ground and Hunnam gobbled it up.

“Sir, you are supposed to catch them.”

“I doona care to abet you in your thievery—” Another missile flew. By the grace of God, he caught this one. “Please stop throwing stolen apples at me.” It was large and red and shiny and looked delicious. Aside from that, it smelled quite tantalizing. As he felt he had earned it, he polished it on his lapel and took a bite. Flavor exploded in his mouth and juice dribbled down his chin. They were excellent apples.

The face disappeared, followed by more rustling. A satchel fell to the loam with a soft thud. Then a pair of feet appeared. Legs. Slim hips. Slender shoulders and then a mop of tousled black curls.

A boy dropped to the ground with an oof. He looked up at Daniel, his head tipped saucily to the side, and then he grinned. It was a rakish grin. “Not stealing,” he said. “Borrowing.”

This he said with such conviction, Daniel had to struggle not to laugh. This was no laughing matter. Thieves ended up in the gaol. “Ah. Borrowing. Surely you won’t mind explaining that to him.” Daniel nodded to the distance, where a farmer was running through the trees toward them, arms flailing.

The boy’s eyes widened. He picked up the satchel and hefted it over his shoulder. Then he bounded into the saddle and shot a glance back at Daniel. His grin was wicked as he urged his mount forward…leaving Daniel behind to explain to the farmer why his apples were missing.

And why apple juice dribbled from his chin.