Susie will be awarding a Vintage Books Smartphone Case to a randomly drawn winner via Rafflecopter during the tour. Click here for the Rafflecopter. Click the banner above to follow the tour and increase your chances of winning.

About The Exiled Jeweler

Emilia Berceto’s beauty captures the attention of a well-known Italian billionaire, Alex Armanti, when she attends a gala at his mansion in Los Angeles. Images secretly captured of her partially nude are released to the tabloids and her overly protective family sends her far away.

Four years later, Emilia continues to live a secluded life designing custom jewelry for the wealthy. Her family needs her to return home to California when their jewelry empire is near bankruptcy. When she returns, she must face the man who caused her downfall and is threatening to reveal her secret if she is to save her family’s jewelry empire.

Driving into Los Angeles proper with her father, they used the valet parking in front of Spago and went into the exclusive restaurant. 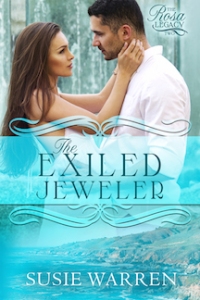 Why would her uncle want to meet at a high profile restaurant instead of the shop? Her uncertainties about the future increased.

Emilia wondered at what point would she be photographed and then mocked in the press as the “sheltered and hidden-away daughter.” The media had made her feel like some sort of oddity whenever they ran a piece about her.

Emilia stopped walking and touched her father’s arm. “What does Uncle James want?”

Her father led her into a foyer area by the glassed in patio. “We were fortunate to get a meeting with Alexander Armati. He owns the Armati Auction House, a series of luxury hotels, a company that builds private planes and other smaller ventures.”

Her heart constricted. She knew him more intimately than her father realized.

She remembered dancing with him at his private gala. He had neglected his guests and focused solely on her that evening. A friend had asked her to go to the benefit gala then at the last minute something had come up. Emilia had been at loose ends and had decided to push herself socially and had taken a taxi to the event.

She remembered Alex stepping forward and holding out his hand when she walked in the front door. She had tentatively shaken his hand and he drew her into a conversation that lasted the entire evening. She could vividly remember kissing him in the garden and feeling as if her body melted into his.

She watched in shock as her father stepped forward to greet Alex Armati.

Susie Warren writes contemporary romance. Besides being an avid reader, she spends much of her free time crafting intense and complex stories about falling in love. When she is not writing, Susie works as an administrator in a small, independent school while caring for three teenagers and keeping tabs on her inventor husband. With the launching of her first book, The Forgotten Heiress, she has slowly begun to navigate the social media realm.

For more information on her upcoming releases, new excerpts and other related postings, or to sign up for free promotions, please visit www.susiewarren.com.

The first novel in The Rosa Legacy series, Ruthless Perfection, started with the idea of a traditional Italian mother who wanted her only daughter happily married. The mother, Carla Rosa Neri, along with her two sisters, Francesca and Marie, had emigrated from Italy as young girls and each went off to create a dynamic and successful family.

Each of the sisters had an only daughter and they made sure the girls spent time together. They attended the same boarding school in the northeast and visited each other’s homes in the summer.

Carla Rosa married into the Neri family with a long history in the Carrara marble industry. Her daughter, Isabel Neri, being a filmmaker and wanting to honor her grandfather’s legacy, approaches a reclusive billionaire, Marc Santoro, to ask permission to produce a documentary about the life of a quarry worker. Ruthless Perfection is the story of how they fall in love.

Francesca Rosa married into the Berceto family with a long history in the jewelry making business. The second novel in The Rosa Legacy series, The Exiled Jeweler, is about her daughter, Emelia, who went into seclusion after a scandal tore the family apart. Emelia is a talented jewelry designer who lived a sheltered life and was drawn into a passionate encounter with her family’s rival, Alexander Armati at a gala. Outside in the garden, photographs were taken on them and sold to the tabloid press. Her family was shocked and embarrassed and sent Emelia off to Florida. Four years later, she returns when her grandfather has a heart attack and her parents are deciding to sell the family business.

Marie Rosa married into the prominent Montgomery family, with a successful background in politics. Her only daughter, Lucia, is fascinated by politics and becomes a campaign aide. The opportunity to work on a senate campaign in Connecticut draws her into the middle of a scandal. Anderson Adams is a dark horse in the senate race yet convinces Lucia to play along with a strategy to save his campaign. The third novel in The Rosa Legacy series, The Convenient Wedding, is the story about how they reconcile their public image with their private life. The Convenient Wedding will be available in February 2015.