It’s been a month since Sarah Marshall was kidnapped and held at knife-point by her ex-fiance.  But Jesse Colter and Adam Sinclair, her two loving Doms, know that there is an even deadlier threat still out there—Ryder Malone.

He blames both Sarah and Jesse for sending him to prison eight years ago for attempted rape, and he’s determined to make them pay.  So, he begins a systematic campaign of terror and intimidation against them.  But the danger he poses doesn’t end there. 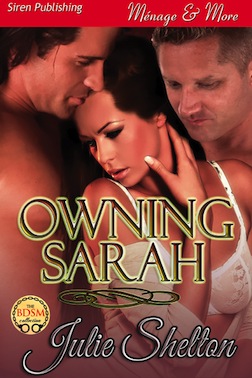 As soon as Sarah finished greeting the last man, Jesse moved in behind her, pulling her against his body, her back to his front. He ran his hands up her arms before settling them on her shoulders. At that blatant gesture of possession, all conversation died and six pairs of eyes bored into her. Wow. She was surrounded by eight strong, powerful, confident men. Men who had survived harsh, primitive conditions. Men who had experienced the brutality of combat and undertaken untold numbers of dangerous missions, all to keep America free. Men whose exploits would never be recognized or acknowledged, who were heroes in the truest sense of the word.

Men who gave new meaning to the term sexy, even if they weren’t particularly handsome. There was nothing handsome about Bulldog, for instance. Yet….wow. The sinuous, animalistic grace of his movements, the air of command he exuded were both undeniably sexy. To a man, these Spec Ops soldiers were tanned, fit, confident, powerful…masculine. These men were potent. The testosterone they exuded was so strong it was almost palpable, a living, breathing thing.

Nearly overcome by a sudden bout of near-crippling shyness, Sarah stiffened her spine and gave them what she hoped was a confident smile. “It’s lovely to meet you, and I hope you all can stay for dinner, although I’m not sure what we’ll have. We’ve been eating so much take-out lately, there’s nothing in the refrigerator but a bunch of science experiments on the properties of mold.”

“And beer,” Adam piped up. “There’s always plenty of that.”

“Right,” Sarah agreed tongue-in-cheek. “Science experiments on the properties of yeast.” Her smile faded. “Like I said, you’re all invited to stay for dinner. But why do I get the feeling that this is not a social call? You’re not here for dinner, are you? You’re here because of Ryder Malone.”

“I see we’ve come to the question and answer portion of the evening,” Jesse murmured, squeezing her shoulders gently before dropping a kiss on the top of her head.

“Speaking of beer,” Adam interjected brightly, turning on his heel and moving toward the kitchen, “who wants one?” Everyone except Sarah and Jesse followed him out there. Turning her to face him, he let go of her arms and lifted his right hand to tuck an errant, mink-brown curl behind her ear.

She tilted her chin to look up at him. “This is about a hell of a lot more than just vandalizing my bedroom, isn’t it? What’s going on, Jesse?”

His fingers stilled, warm against her skin, sending a shiver through her. Aware of the undisguised interest on the parts of the men filtering back into the room, beer bottles in hand, they struggled to fight the sudden heat blazing between them. “Don’t worry about dinner, baby,” Jesse said in an effort to divert her attention, “It’s all taken care of. I’ve ordered a Pig-Out Feast for Twelve from Porky’s Bar-B-Q.”

“But,” she spread her hand in confusion, “there’s only nine of us.”

He just chuckled. “Obviously you haven’t seen these guys eat. Anyway, they’ll be deliverin’ it in around”—he glanced at his watch—“half an hour or so, so be on the look-out while we finish up—”

“Finish up what?” she interrupted quietly, refusing to be diverted. “Answer my questions, Jesse, and stop trying to protect me from the big, bad world out there. I know what’s out there, remember? I see it every day in court. So, why are they here? What could Ryder Malone possibly have done to merit a response like this? An entire SEAL team? Really? Don’t you think that’s just a little bit over the top? Like sending a Cruise missile to take down a gnat?”

“Well, if it makes you feel any better, they’re no longer SEALs,” he offered lamely, lifting one shoulder in a slight shrug.

“Who are they, Jesse? Aside from the biggest, scariest, meanest-looking, bad-ass, uber-macho bunch of guys I’ve ever laid eyes on? Some sort of clandestine, super-covert, black-ops commando group that’s so Top-Secret not even the President knows about them?”

Everyone froze. Seven pairs of eyes were suddenly riveted on her. Her mouth dropped open as realization sank in.

“Told you she was smart,” Jesse muttered back.

Sarah just stared up at him, dumbfounded.

“It’s okay? It’s okay?” Seized with a sudden need to shiver, she crossed her arms over her breasts. “How can this possibly be okay? What, exactly, makes this okay?”

“Well, for one thing, I’m pretty sure the President knows about us,” Jay offered helpfully, patting her shoulder as he passed her on his way to the couch.

“Looks like she’ll be coming to the meeting.” Adam joined them, grinning, holding out a frosty bottle of beer. She just stared at it pointedly until, shrugging, he withdrew it.

“What meeting?” she wanted to know.

“The meetin’ that’s startin’ right now,” Jesse said grimly, grabbing her by the elbow and steering her unresistingly toward the sofas and chairs gathered around the stone fireplace.

“C’mon, sweet pea.” Adam latched onto her other elbow and they led her to one end of a brown leather sofa where they sat with her tucked snugly between them. The other six men spread out on the other sofa across from them, the oversized ottoman, and in the two club chairs.

Jesse turned his attention to Bill Payton. “Okay, Wildfire, it’s your show,” Jesse said before relaxing back against the cushions himself. Conversation died as they all turned their attention to Bill “Wildfire” Payton, who cleared his throat, and looked directly at Sarah. “Sorry to bring this to your doorstep, Sarah. But it appears that your boy Malone is one seriously bad dude.”

Julie has always loved stories, both reading and writing them, ever since she was old enough to hold a book in her hands. One of her favorite childhood activities was smuggling books under the covers to read by flashlight after she was supposed to be asleep.

A career as a children’s librarian eventually led to her dream career as a freelance storyteller and puppeteer, a business she operated successfully for twenty-five years. During that time she created and wrote all the original material for a monthly language arts newsletter full of poems, songs, puppet and flannel-board stories, fingerplays, and other resource material for early childhood educators. For that endeavor she won the prestigious EDPRESS Award for the best educational newsletter of 1982.  She has also written other resource materials for preschool and early elementary teachers.