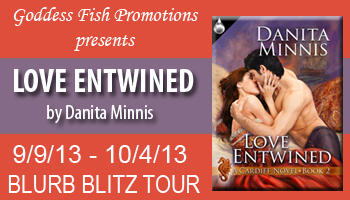 Amelie Laurent is on her way to the top of the jewelry designing world with no time for men. Her orderly life is about to come undone when playboy and jewelry tycoon Roman Cardiff steals her away on assignment to a remote English estate. Roman wants Amelie all to himself but St. Clair Manor’s resident ghost has been waiting for her much longer than he has.

An unseen gunman takes a shot at Roman and he blames a business rival. But Amelie and Roman are to blame, for falling in love 200 years before in a time neither of them remember.

From the heartbreak of pre-Revolutionary France to modern day corporate wars, Amelie and Roman uncover a history of blood jewels, lust and demons.

When Amelie discovers her inner witch she learns the real reason she was summoned to St. Clair Manor. Il Dragone will kill to get her back. Amelie will kill if they do.

Amelie faced Mr. Cardiff. Folding her arms, she acknowledged what had passed between them and accepted his dare. “It would be my pleasure.”

Harold gave her an odd look and guided her to the divan as if she needed some guidance, which only served to irk her more. “You will be in good hands with Amelie. Did you know that she was lead designer behind Bijou’s Artisan Collection?”

“I had no idea.” There was a slight edge to Mr. Cardiff’s tone, but it was nothing compared to the arrogance that frosted his eyes. “And how is our old friend Garamonde?”

Was it possible to hate someone at first sight? 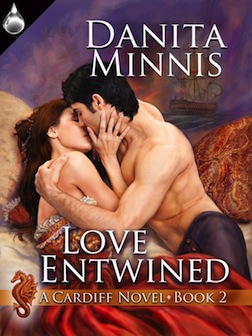 Harold coughed, and she refused to look at him. She would stare Mr. Cardiff down until closing time, if need be.

As quickly as his eyes had frosted, they warmed up again with amusement.

She could not quell the sinking feeling she had lost control of the situation. She suspected it had never been in her possession in the first place. But now that the fateful words of acceptance were out of her mouth, the wind went out of her sails.

Mr. Cardiff smiled as smoothly as he had just engineered this desired outcome. He sat down on the other end of the sofa and stretched long, muscular legs out. They nearly reached the desk Harold leaned against. A swimmer’s physique, she thought and then shut that errant thought down as quickly as it had surfaced. “Excellent,” he said. “When will you be ready to leave for St. Clair Manor?”

“Mr. Cardiff, this is highly irregular. I cannot be contracted out…” She looked at Harold.

She schooled her voice back to a modicum of professionalism.

“Mr. Cardiff, we have everything we need here at Penrod’s to do the job. I can forward the sketches to you in just a few weeks’ time.”

Harold cleared his throat and belatedly, she realized what he was going to say.

“Actually, Amelie, we are also contracted for a refurbishment project.”

Merde, it would take months.

She had gone from the verge of resigning her position to yet another commitment, to him, no less.

I should have known I would end up here…

My sisters and I walked ten blocks to the library every Saturday morning and picked up books to read for the week.

When I was older, I spent a couple of hundred dollars at Barnes & Noble and my mother thought I was crazy. I couldn’t deny it – I just had to read (but I became sort of a closet-book-buyer after that).  I started writing poems first

Song writing was next, when I realized I had a singing voice, then singing with local bands. It wasn’t long before I just knew I was going to be the next singing sensation.

And now, here I am, a shower-singer (the enclosed tile room is almost as good as a studio mike) and happier than I’ve ever been, writing paranormal romance with a healthy portion of mystery, murder and reincarnation. It’s romance through the ages.